Signage outside the entrance to Short’s Brewing Company in Bellaire, Michigan 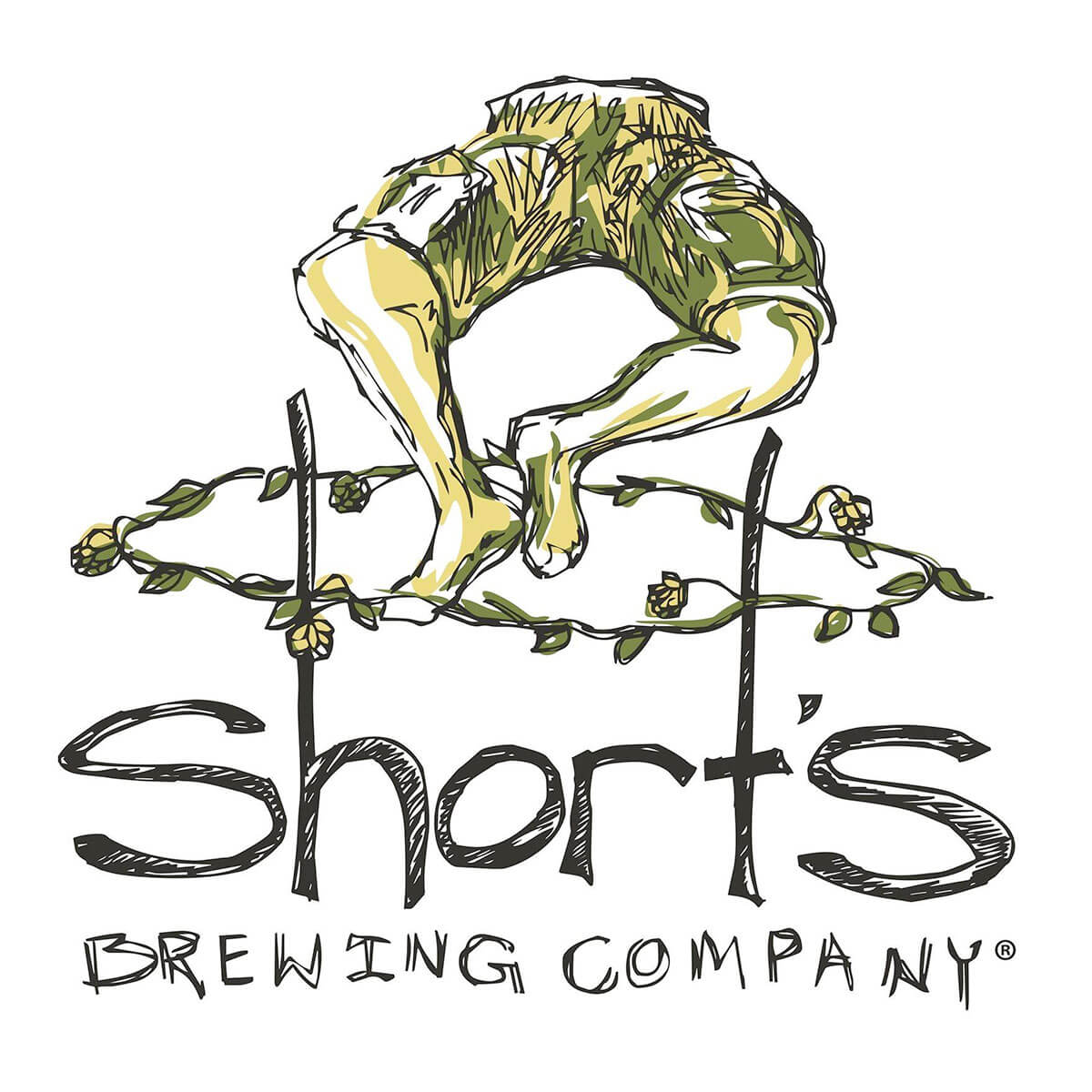 The story of Short’s Brewing Company began when a 22-year-old brewer named Joe Short registered Short’s Brewing Company as a business in the state of Michigan. Having already gained significant brewing experience at other Michigan breweries, Joe realized that his style of brewing was best suited to his own business model where he would not have to answer to anyone for putting lots (and lots) of the best possible ingredients into his brews, or for brewing specialty beers that some might consider outrageous. Joe wanted to brew bold, flavorful and extremely creative beer, and felt that people would travel out of the way to get them.

Renovation of the 120-year-old hardware store began in January 2003 when Joe and several friends and volunteers began renovating and restoring the building to what it is today. All the craftsmanship was done by Joe, friends and volunteers, from the trim mold to the bar, right down to the mosaic tile Short’s logo near the pub entrance. The logo mosaic took four people three straight days to complete. The brewing equipment was purchased used. The original seven barrel pub brewing system came with five fermenters and five serving tanks. Many roadblocks and challenges threatened to cancel the project. However, with hard work, determination and many good people lending a hand, the project was finally completed after 18 months. The pub opened its doors on April 26, 2004.

Of building the pub, Joe said: “Words cannot describe the heartache, stress, losses, physical and mental fatigue, and great rewards experienced throughout the struggle to bring the Short’s Brewing Company project to fruition. It is real, and remains real, because we believe in what we do and always have. Short’s is and has been supported by the immediate community and the brewing industry. Short’s Brewing Company is gaining popularity and is highly regarded among the brewing industry for its innovative brewing and tenacity to beat all odds that oppose its inevitable success.”

Though the business got off to a slow start, things began to turn around when Joe’s girlfriend (now wife) Leah joined the team in 2005. Leah managed the deli and took responsibility for the creation of our delicious food menu. This gave Joe more time to concentrate on the brewery and business side of things. Soon after, Scott Newman-Bale, a.k.a. the Magician joined the team, and with his help projects, such as the 2007 Imperial Beer Series, were financed and the brewery finally became a profitable business.

Short’s purchased an old manufacturing building in Elk Rapids in January of 2008. After a year of intense research, fundraising and sweat equity, we were able to design, construct and assemble everything to brew our first Elk Rapids batch of beer in January 2009. When the first production batch shipped in March of 2009, every bottle on the truck was labeled by hand. We have since continued to fund our growth based on our past sales to continue to meet the demand for our beer.

The only thing that stays the same at Short’s is change! In 2014 we opened our very own “Brewtique,” Short’s Mart and launched Starcut Ciders. Born out of a desire to make unique and traditional ciders from the orchards that surround us in Northern Michigan, Starcut now boasts a portfolio of year-round flagship and pub-only ciders. 2016 continued to bring change as our distribution footprint expanded to include Ohio, Indiana, Illinois, Wisconsin, and Colorado (cider only). Pub renovations included the addition of new indoor and outdoor seating, a new kitchen, and a third bar. In 2019, our beer made its way to Florida for a permanent spring break and we launched Beaches Hard Seltzer through our beverage innovation brand, Superfluid Supply Co.

Today, Short’s Brewing Company continues its efforts to make the best beer on earth in Northern Michigan. Although we have quickly grown to be one of Michigan’s largest breweries, we still take pride in our hands-on, mom-and-pop approach and the energy we put into the quality of our beer, food, staff, customers, and facilities. We still brew our beer the same way we always have and we always will.

Short’s celebrated its 15th Anniversary on April 26, 2019, and is still owned and operated by Joe and Leah Short. Our success is based on their hard work, sacrifice and direction. We continue to celebrate each year of fearlessly creative beers annually at our anniversary party in April. We hope you’ll join us in Bellaire any time of the year for a flight or a pint of Northern Michigan craft beer.

Inside the brewpub at Short’s Brewing Company in Bellaire, Michigan

Outside the entrance to Short’s Brewing Company in Bellaire, Michigan

Short’s Brewing Company in the News